Jazmyn Frye Promoted to Director of Equal Employment for GCEO 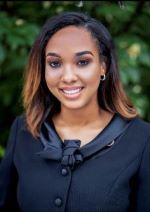 Prior to becoming the Equal Employment Division Director, Jazmyn served as a Compliance Officer in the Fair Housing Division. She also served as an Administrative Hearing Officer with the Georgia Department of Labor.

Prior to law school, Jazmyn volunteered her time tutoring economically disadvantaged children through both the Big Sister Little Sister Program, and the Women of Perfection Organization.  While tutoring economically disadvantaged children, she realized she wanted to serve deprived communities by being a role model and giving a voice to those who are under-represented in the legal community. She hopes through her legal career to build bridges that would unite the under-represented with the represented.